Skip to content
You are here:Home|Posts|Eventi e News, Places to visit during your holiday in Bormio|Cancano and its lakes, one of the most visited and photographed places in Alta Valtellina.

Cancano and its lakes, one of the most visited and photographed places in Alta Valtellina.

Cancano is one of the most visited and photographed places in Alta Valtellina.

Cancano (1907 meters a.s.l.) is one of the most visited and photographed places in Alta Valtellina. Located in “Val Fraele” (Fraele valley), in the municipality of Valdidentro, it has been a protected area included in the borders of the Stelvio National Park since 1977.

About 15 kilometres from Bormio, the Cancano lakes area surprises its visitors thanks to the majesty of its environment where the 2 big artificial basins of Cancano and San Giacomo stand out from the scenery.

The very panoramic access road, designed with a slight and regular slope, was built by the AEM (energy company of Milan) during the construction of the dam “Cancano II”.

The new road was fundamental in permitting the transit of the trolley-truck with the materials necessary to build the impressive dam.

The ascent, marked by 21 hairpin bends, brings you to 2 little tunnels dug into the rock. A few meters after the tunnels, the spectacular “Torri di Fraele” (ancient towers) have stood out  for hundreds of years.

Here it’s necessary to take a break to enjoy the wonderful landscape of “Valdidentro” and its mountains. Continuing toward the lakes the road becomes flat. After passing along the beautiful natural lake of “Scale” you will reach the Cancano area with its wide horizon, its shelters and its many hiking and environmental opportunities.

The alpine lake that you meet a few dozen meters after the “Torri di Fraele” (towers of Fraele) is a natural lake called: “Lago delle Scale”. The principal characteristic of this lake is the absence of evident inflow and outflow. For this reason, throughout history, this lake was compared to a pond or a “dry lake”. This little lake, private also nowadays, in the past was property of the aristocratic family Alberti of Bormio that used these waters to breed fish to eat (and sell) during the Lent weeks.

HOW CAN I REACH CANCANO FROM BORMIO?

Cancano is reachable from Bormio following initially the national road 38 in the direction of Stelvio Pass.  At the fork with the national road 301 of Foscagno, you have to follow that road in the direction of Livigno. You continue for about 3 kilometres until you reach “Fior d’Alpe” where, near a little church and a restaurant-pizzeria, you find the crossroad to Cancano. On the right side of the main road you see a steep street with a brown sign indicating: “Torri di Fraele – Laghi di Cancano – Pedenosso”. Take this road (via Cancano) and follow it for 300 meters. After that, at the next intersection, turn right on the Cancano road.  9 kilometres of asphalt road, marked by 21 hairpin bends, take you to the “Torri di Fraele” (ancient towers). From the towers you continue straight for about 1.5 kilometres until you arrive at the big car park near the A2A house.

In the summer season Cancano is also reachable by taking the public bus of “Automobilistica Perego”.

Since 2019 the road to Cancano has a toll. In the months of July and August travel by car around the 2 big lakes is forbidden. Near the picnic area of “Sasso di Prada” (along the uphill road) you find the small machine where you can buy the toll ticket. At the end of the route there are lots of car parks (payment included in the ticket) and some areas well-furnished with benches and tables. There are a lot of opportunities for a nice picnic.

In the winter months the access road to Cancano is closed due to the risk of avalanches. 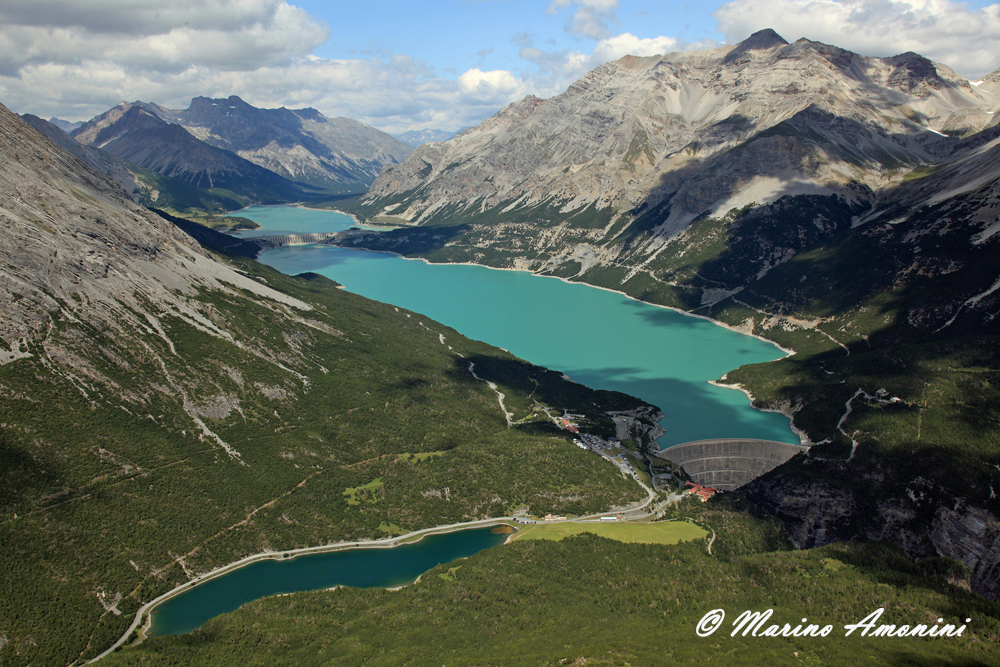 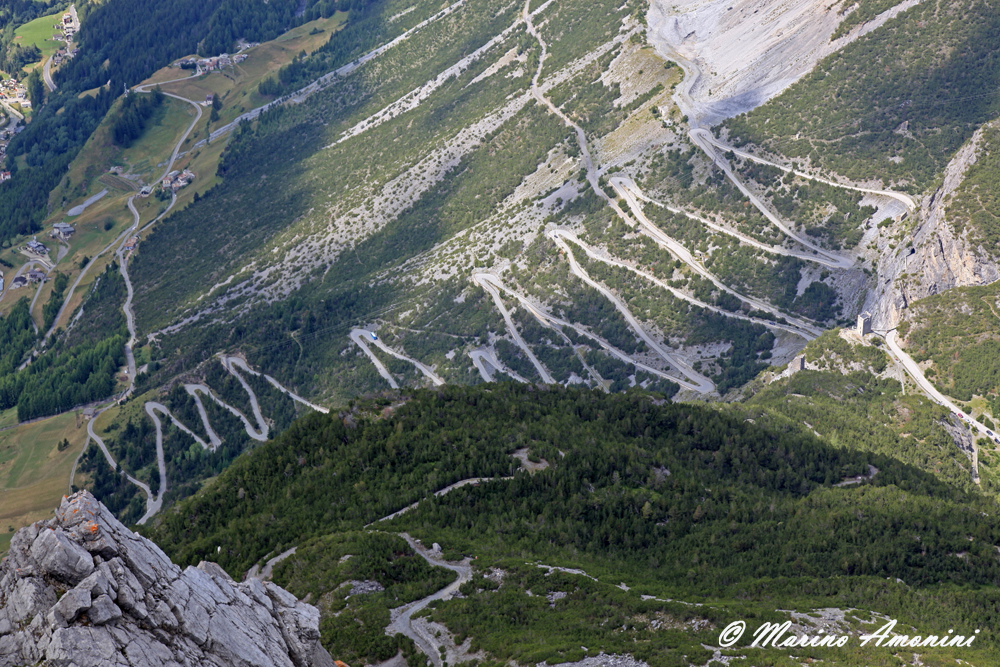 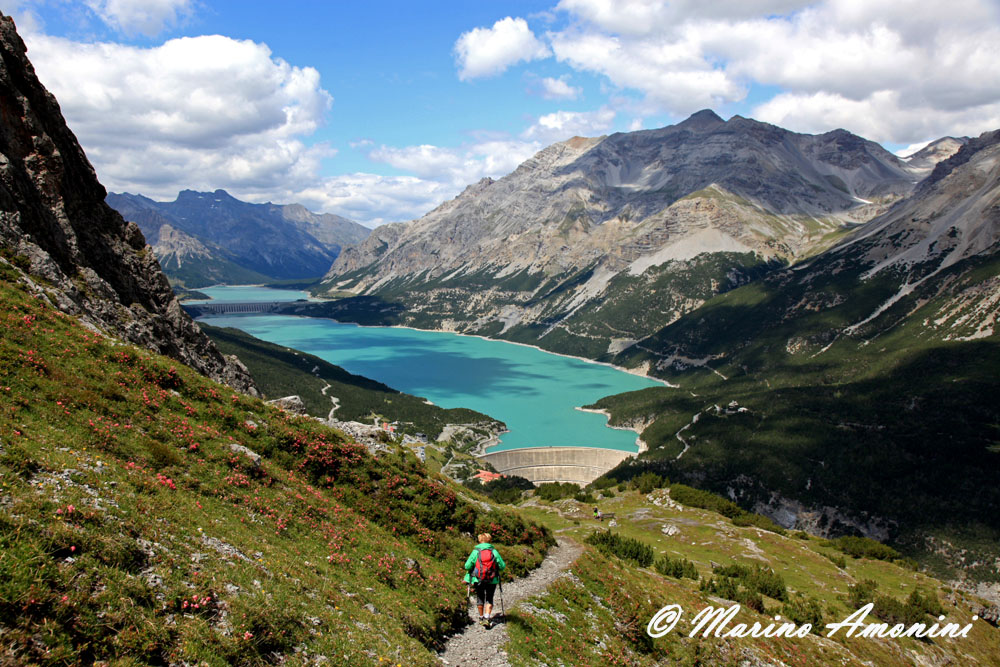 The Cancano area is reachable from the last part of the spring to the first major snows of the autumn.

WHAT TO DO  IN CANCANO

Excellent from an environmental and landscape point of view the lakes of Cancano area offers interesting sports opportunities but also simply cultural and panoramic ones. Regarding this last point, in addition to seeing  the majestic dams, we suggest you visit the small church of Solena.

As we said before, there are a lot of sport opportunities. Dozens of professional athletes and many sports people take advantage of this wonderful place to train with bike rides, runs or hikes of every difficulty and length. The road around the lakes is a stone road, with minimal difference in height, a bit more than 20 kilometers long and completely surrounded by nature.

Near the “Rifugio Monte Scale” you can find a bike hire shop well-furnished with classic Mountain Bikes and electric assisted E-Bikes. (We suggest you book the bike before your trip) (inserire link a nostro articolo)

The popular bike ascent to the lakes of Cancano, greatly loved by cyclists from all over the world for its majestic environment and landscape, on October 22nd of 2020, was the finish line of the 18° stage of the Giro d’Italia (the stage was won by Jai Hindley of team Sunweb).

The hiking excursions described by us and available for free on the blog of Albergo Adele are: 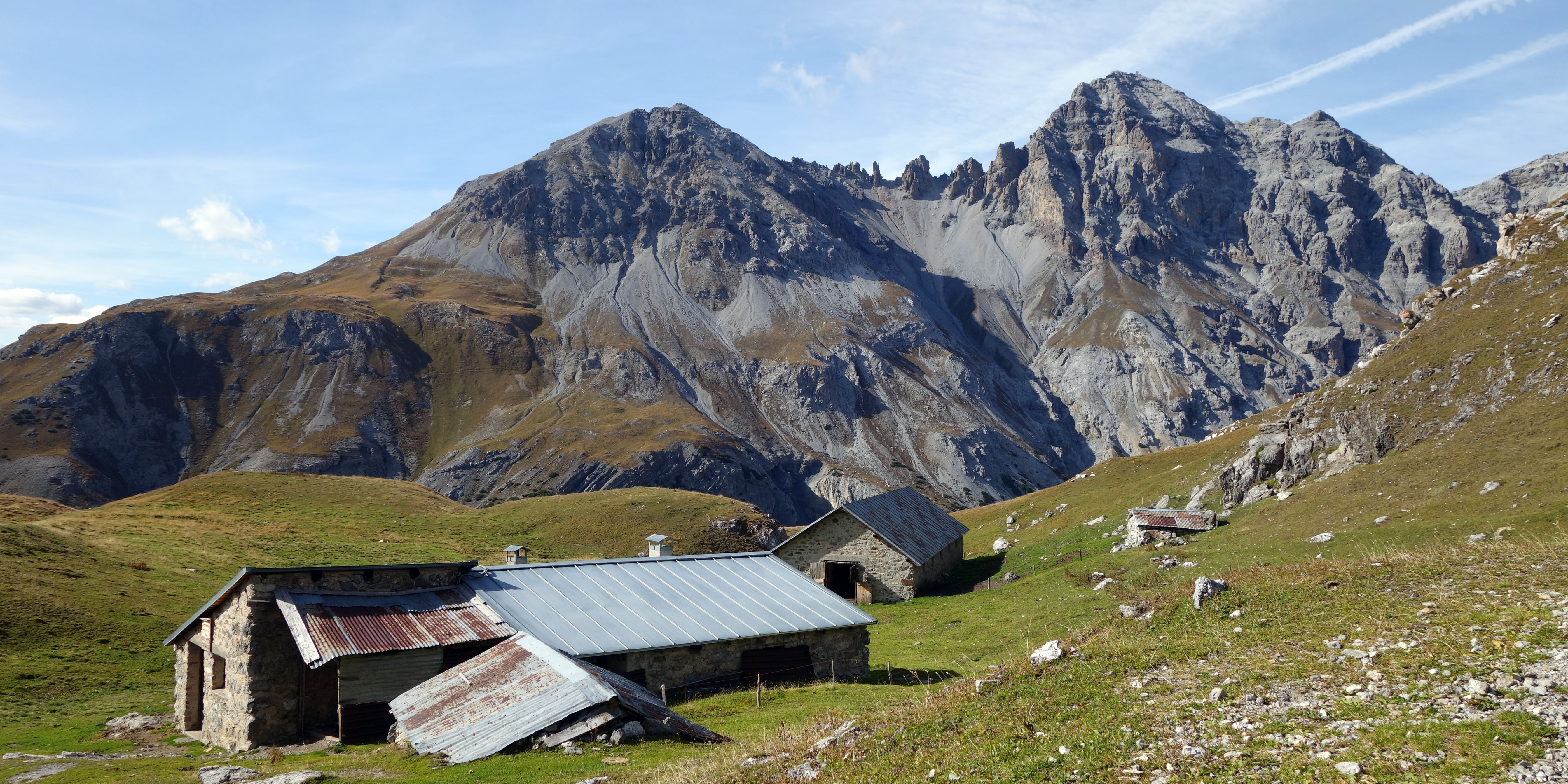 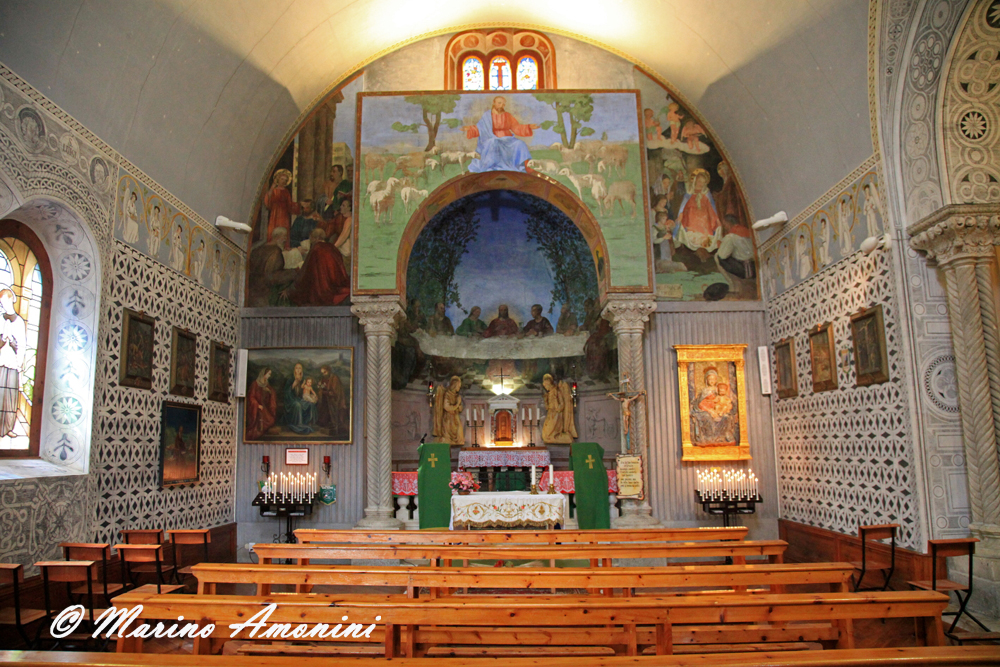 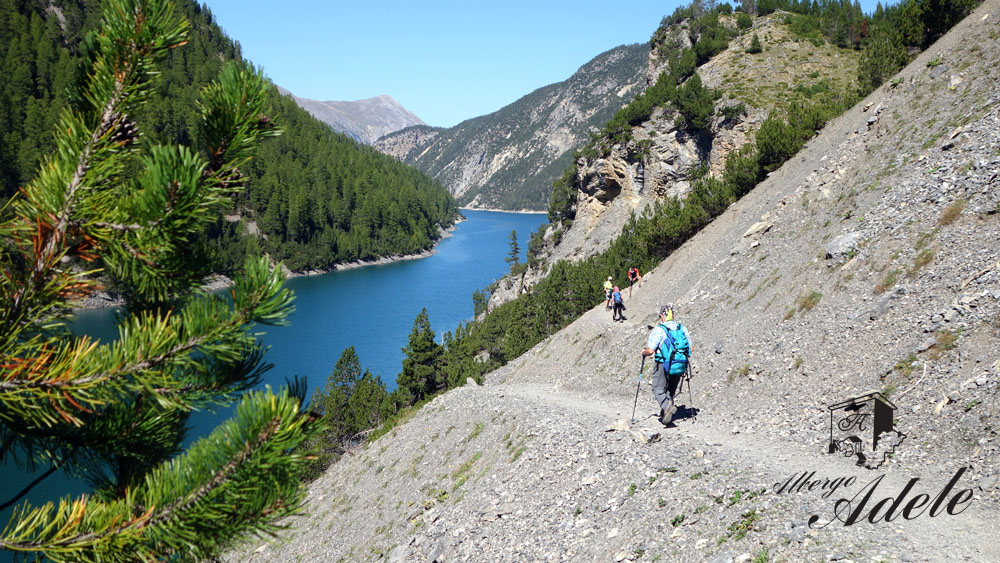 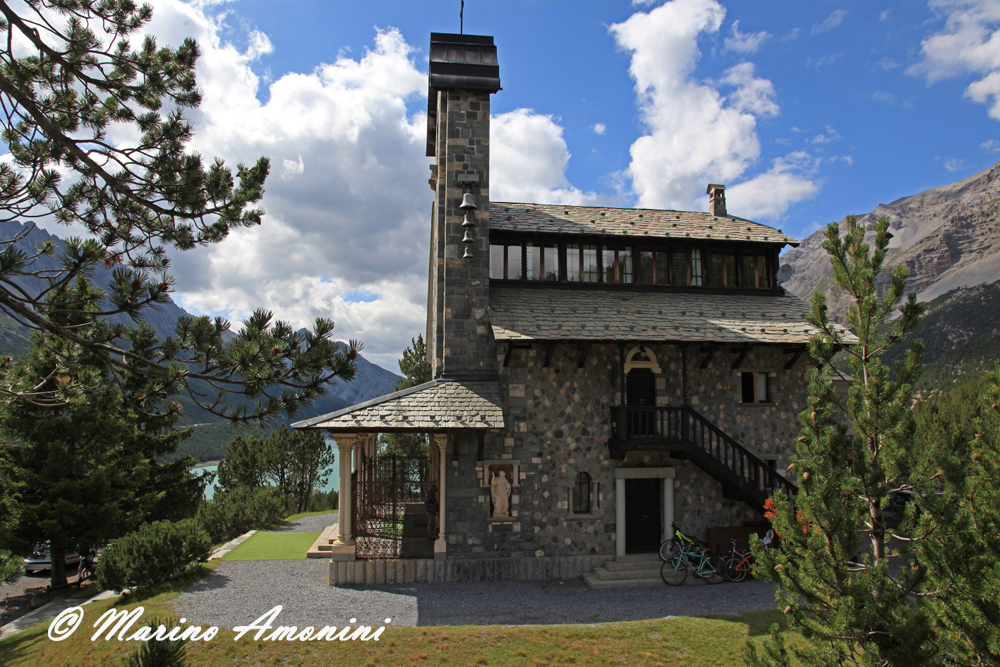 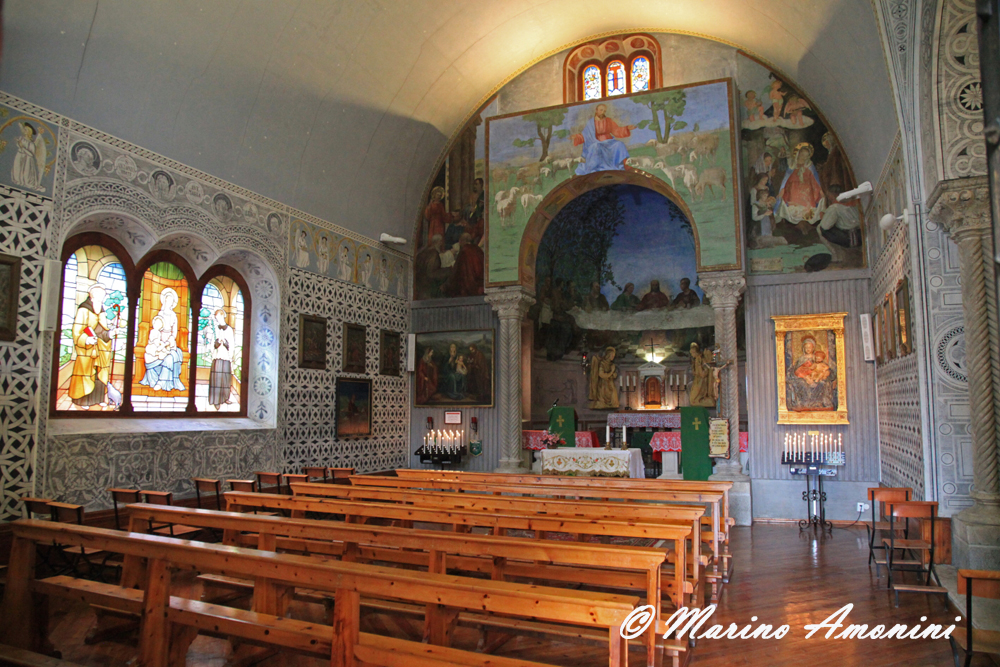 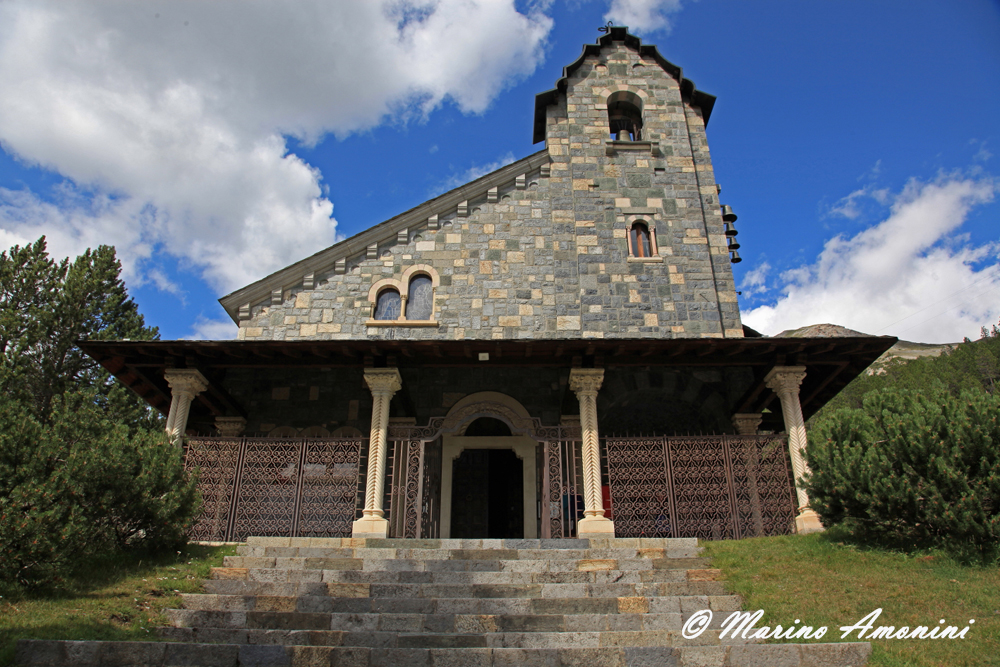 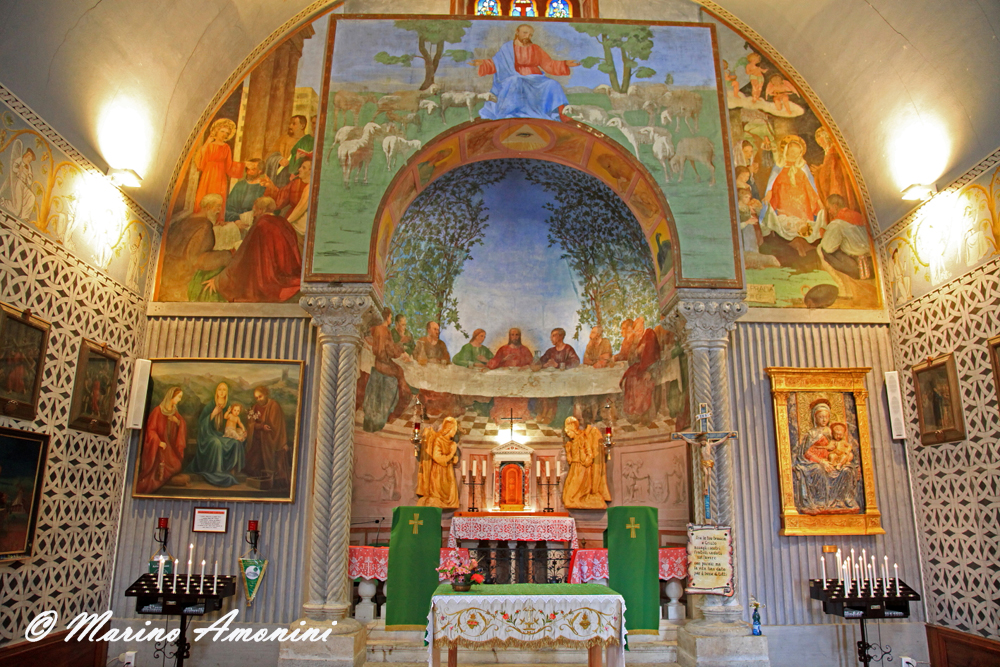 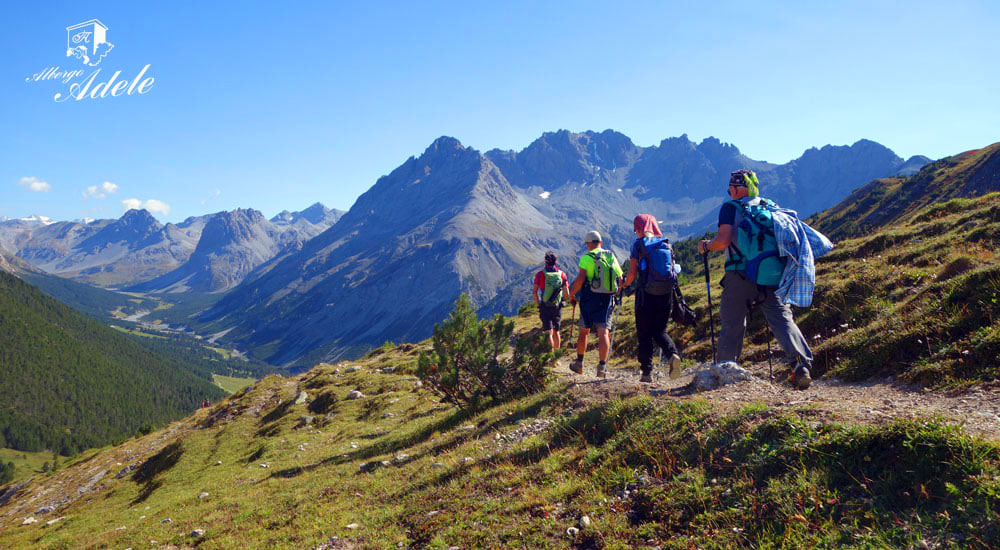 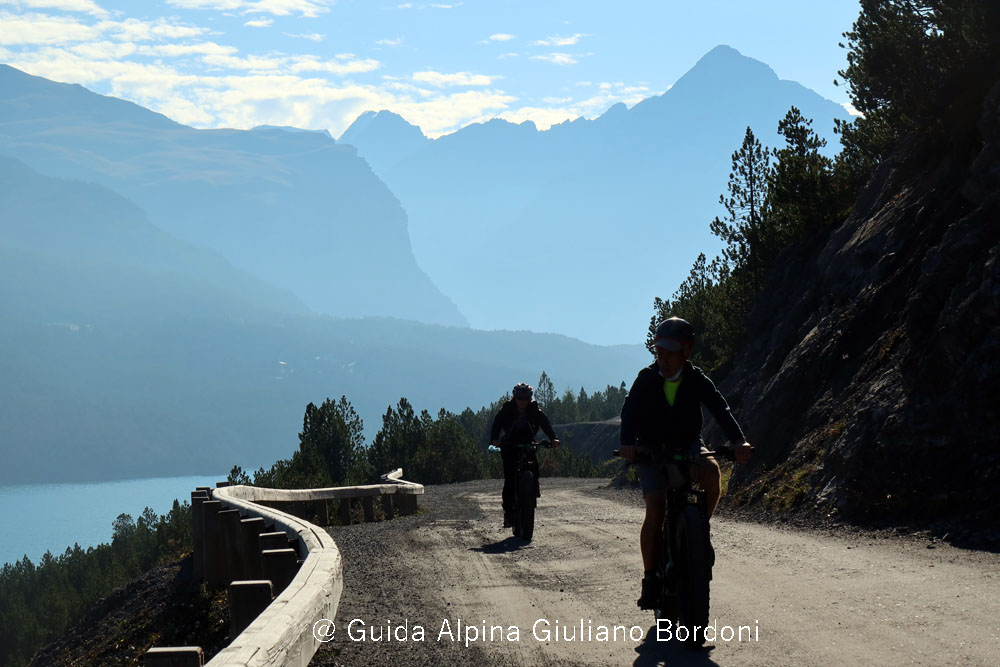 A SHORT HISTORY OF THE ARTIFICIAL LAKES OF CANCANO

The “lakes” of Cancano are two different water basins: San Giacomo (second lake) and Cancano (first lake). All the waters of  Alta Valtellina, above the 2000 meters a.s.l. from the Gavia Pass to Livigno, are channeled into these two big lakes.

They were constructed between 1922 and 1956 by the energy company of Milan (AEM).  The construction of the dam Cancano I (nowadays almost never visible because it is submerged) started in the first years of the ’20s  and was completed in 1928 at the same time as the Isolaccia power plant.

In the following years, to cope with the continuously increasing demand for energy, AEM and other Italian energy companies greatly strengthened their infrastructure within Valtellina.

The insatiable hunger for energy and the optimization of the distribution network required the construction of much larger water basins than the existing ones. The valley of Fraele was again thought to be suitable for that goal.

In 1940 the construction of the dam San Giacomo started and, with irregular building times due to the war, took until August 1950 to be completed. At the time of its inauguration it was the biggest artificial lake in the world. But it was still  not considered enough.

The reconstruction after the war, the city development of Milan and the Italian economic boom needed more electric energy. For this reason AEM chose to plan a new dam,  bigger than the previous one. In 1953  the construction site was prepared and in June 1954 work was started on the dam Cancano II. On May 3rd 1956 the new dam was inaugurated and since then the landscape is how we can see it today.

CURIOSITIES OF THE CANCANO DAMS

Cancano I is an arch-gravity dam. 43 meters high and built between 1922 and 1928, it had a lake with a maximum storage capacity of 24.5 million cubic meters. This dam is rarely visible nowadays because it is almost always submerged by the water of the Cancano II dam.

The dam of San Giacomo is a buttress-dam with massive gravity junctions. 91.5 meters high and 965 meters long, it was built between 1940 and 1950. Its lake has a maximum storage capacity of 64 million cubic meters. When the lake was filled the little village of San Giacomo and its medieval church were submerged.

Nowadays, thanks to the waters, the power plants of the Alta Valtellina, primarily Grosio and Premadio, provide an overall power of 428 MW. 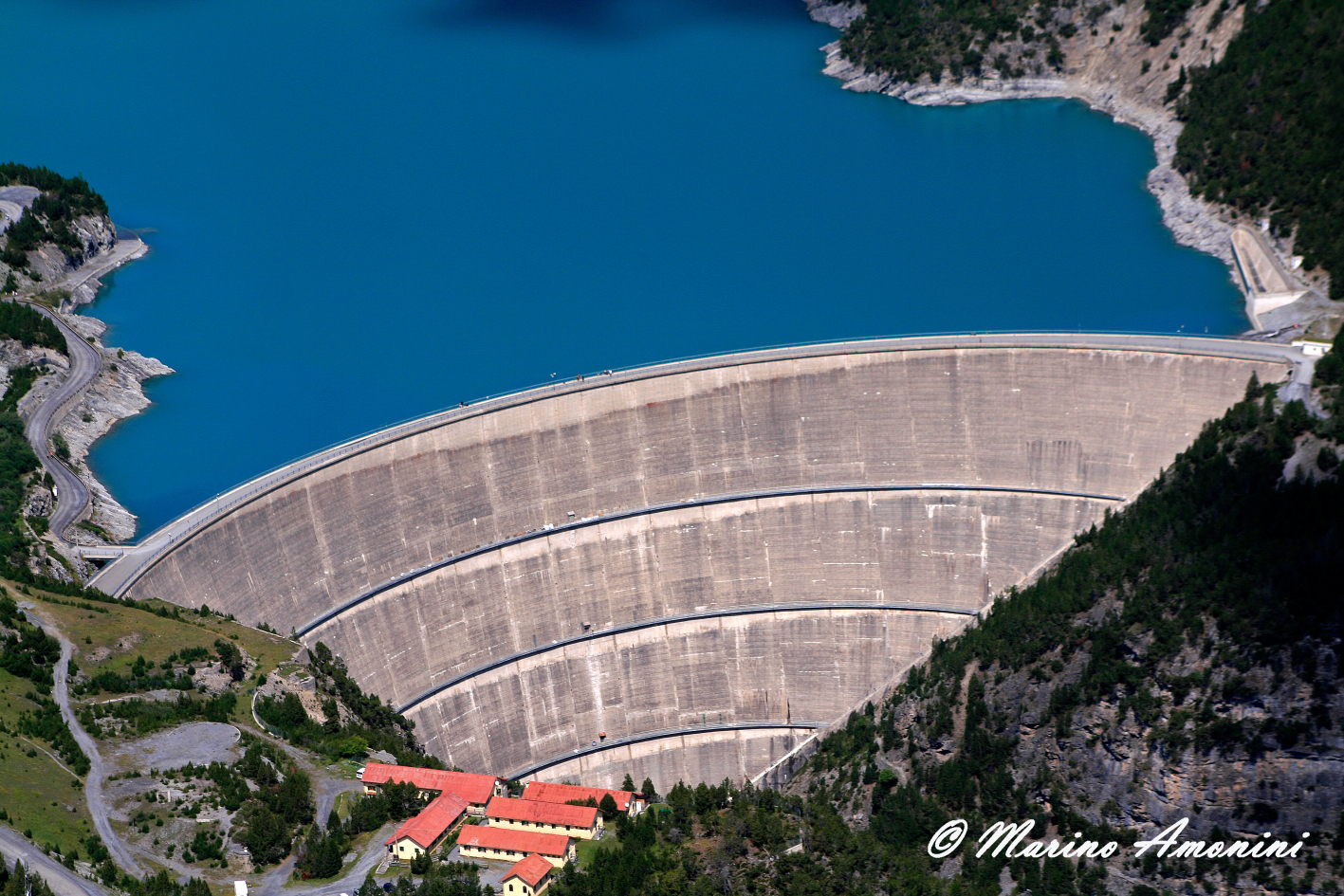 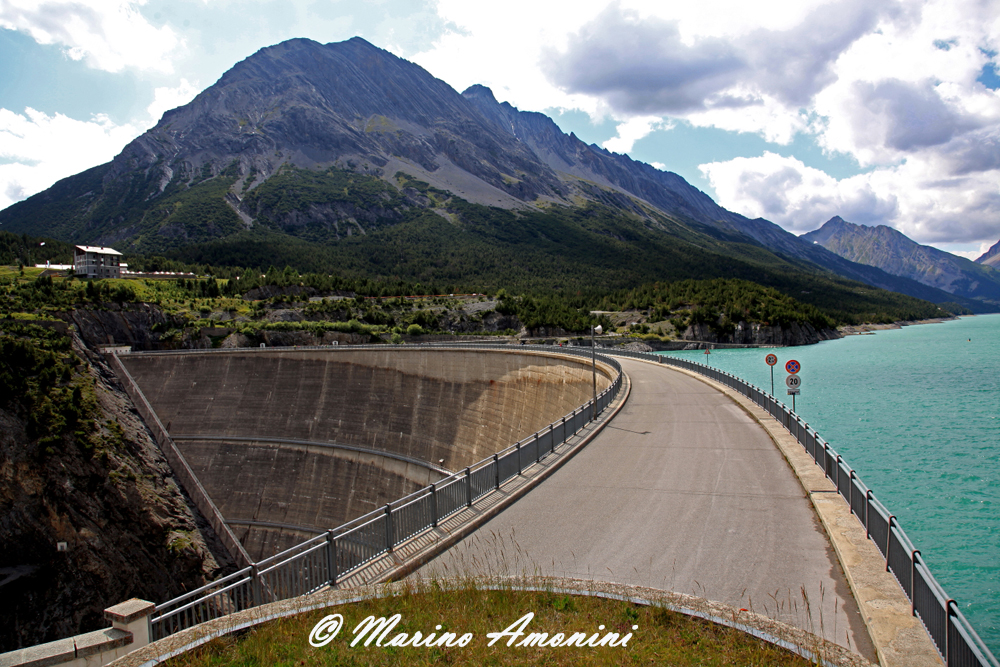 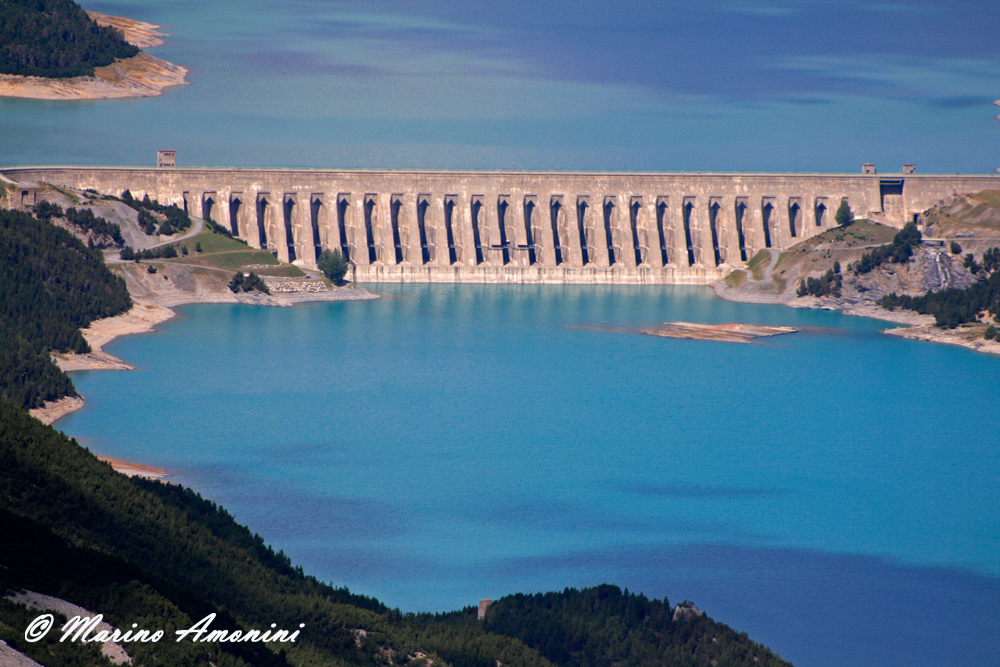 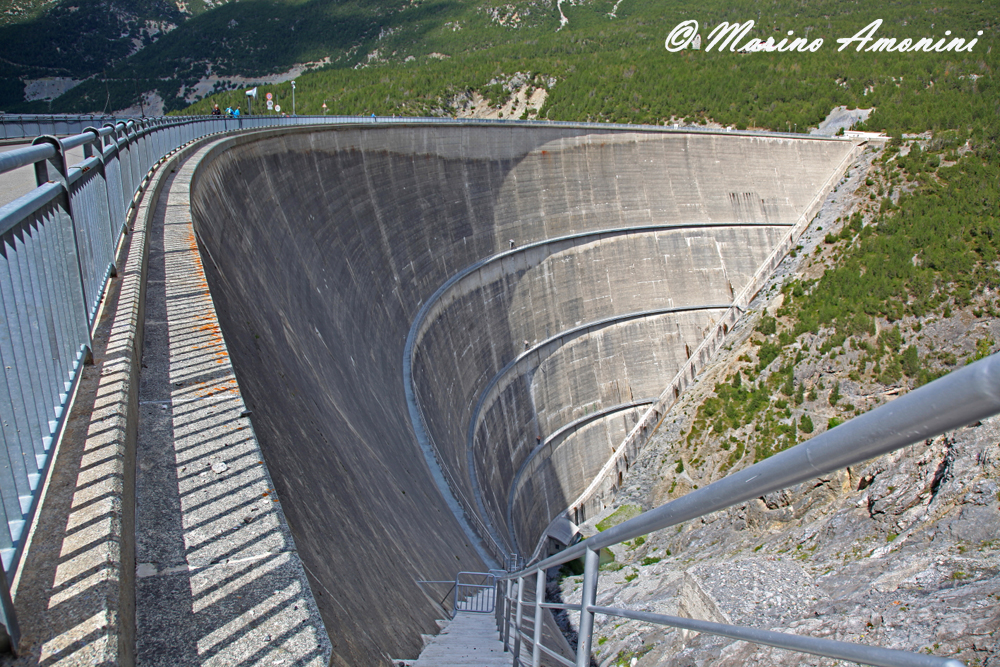 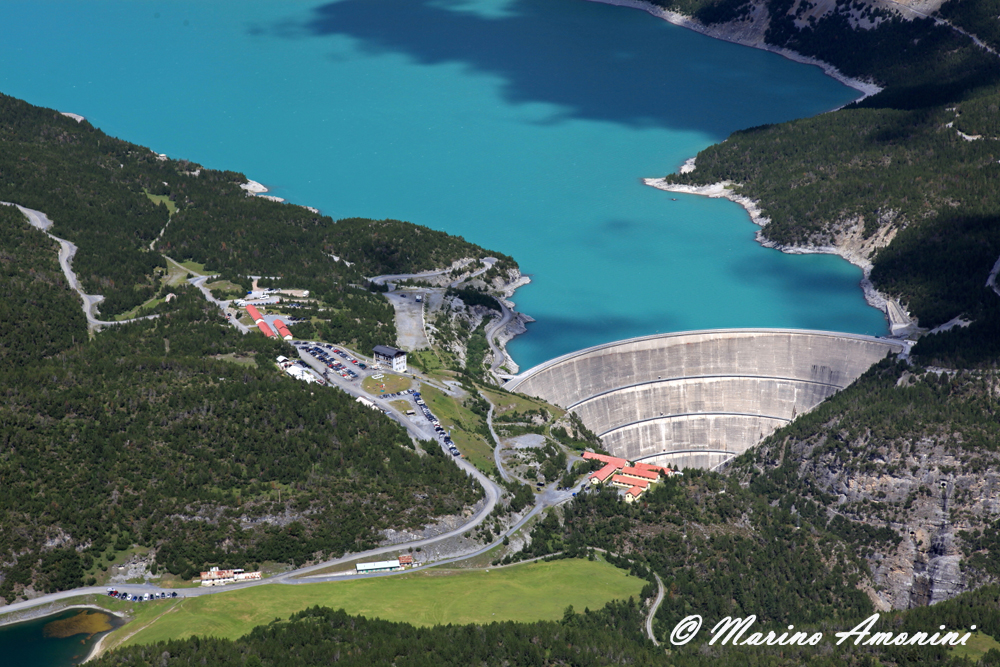 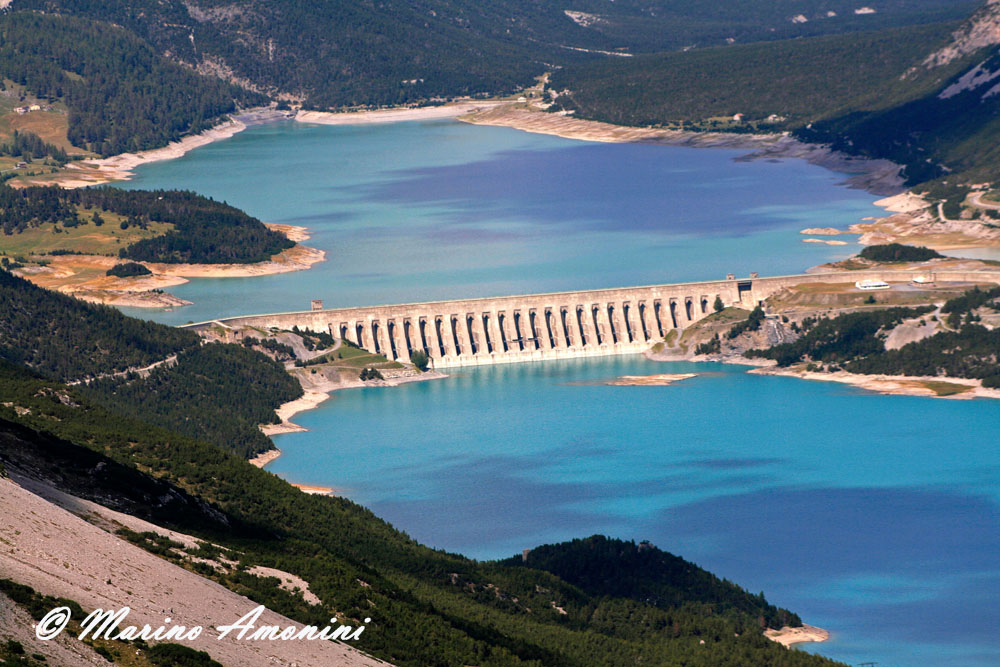 For more than a thousand years the route of Fraele, along with the route of Umbraglio, has been one of the most important and disputed transalpine routes. The importance of the commercial and military traffic of these roads is lost in the mists of time. The most important village of the valley of Fraele was the village of San Giacomo that, although not larger than a few houses, had a particular importance.

The little town was marked by the medieval church of San Giacomo (documented since the 13th century), which also had beside it a “xenodochio” (ancient Catholic hostel) to accommodate wayfarers and pilgrims. Iron mines and furnaces were also present in the area and here the iron ore was worked before it was sent to the smithy at the bottom of the valley.

The village was most likely populated all year round. This was almost certainly true until the Napoleonic era. In that era, in fact, the village was almost completely destroyed and its citizens were forced to escape to Premadio and Pedenosso.

In the first half of the last century, before being submerged by the  waters of the dam, the little village still had: a barrack of the customs officer, a postal station, a tavern and the aforementioned medieval church of San Giacomo.

The most cruel and dramatic event in the history of this area happened in 1635. During the famous 30 years’ war between Spain and France, a big battle took place near San Giacomo and more than 2000 soldiers died on the field.

– One morning in November 1935, Massimo Bradanini, known as “Castrìn”, saw the ghosts of the soldiers appear out of the waters of lake San Giacomo and, exactly 300 years after the battle of 1635, they were continuing to fight.

– The San Giacomo bell tower was not destroyed by the waters during the first year’s flooding and, as the bell tower of the lake of Resia (BZ) does nowadays, remained alone and austere to remind the citizens of the valley of the history submerged by the waters. Maybe because of that, it was demolished the next year…

Enjoy your visit to Cancano!!

Stefano and all of the staff of Albergo Adele 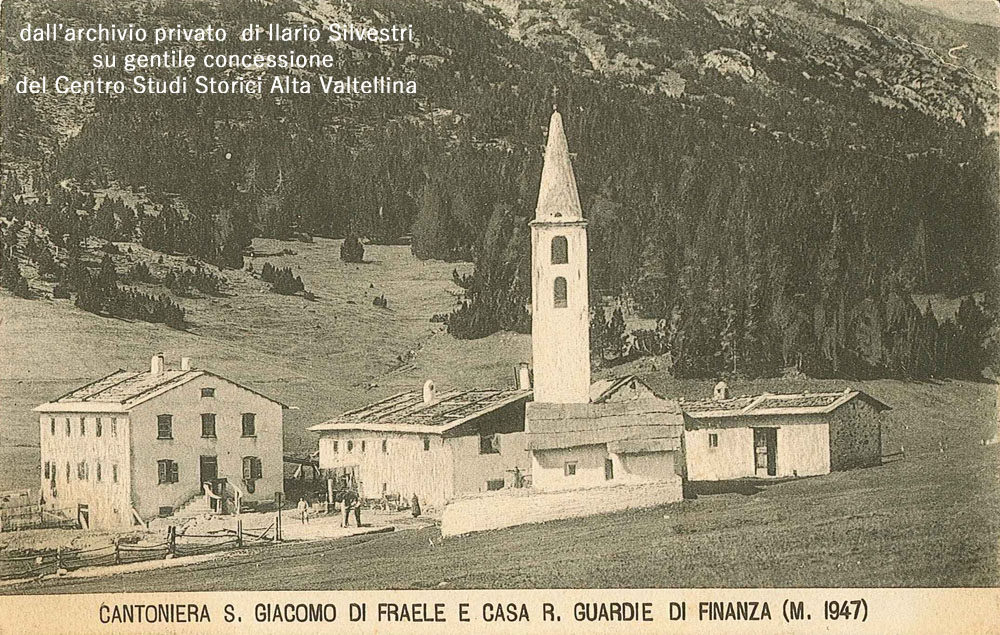 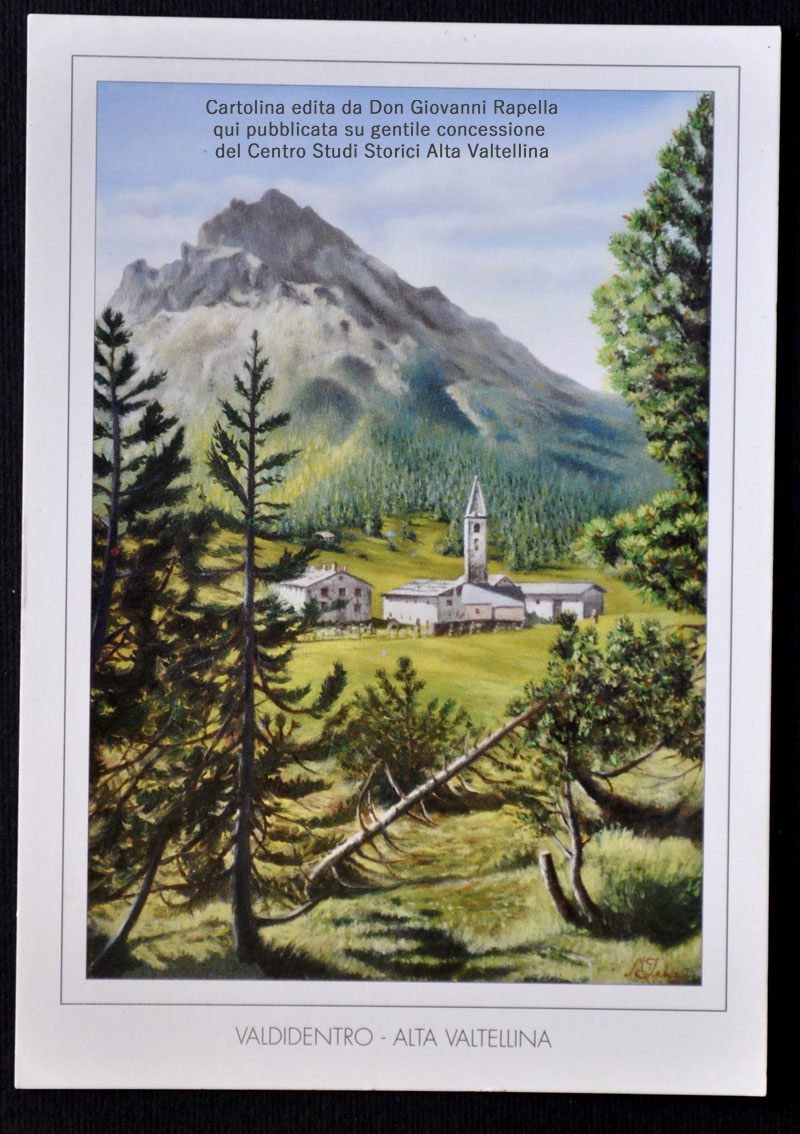 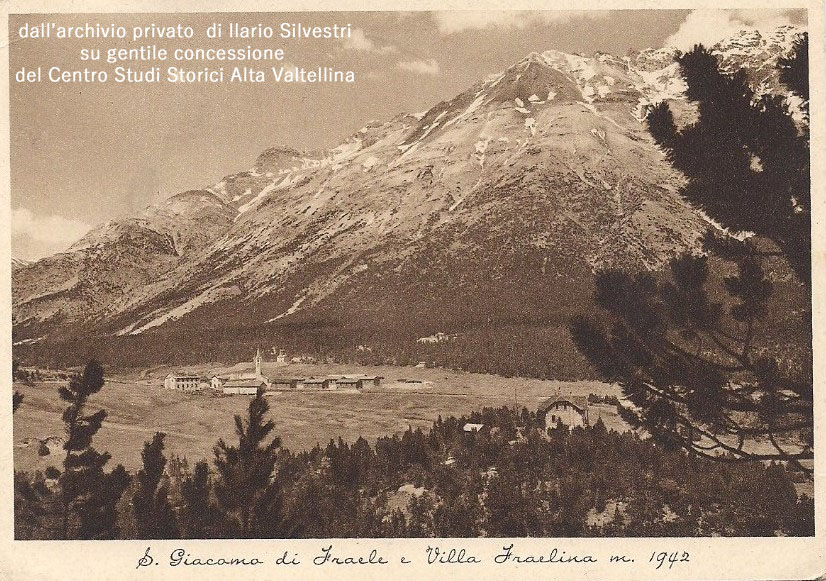