Skip to content
You are here:Home|Posts|Hotel Adele: a hotel, a family|Albergo Adele in the 80ies

Albergo Adele in the 80ies

Albergo Adele and Bormio in the magic eighties

In 1980 Luisa married Giovanni Bedognè, energetic, strong and determined “Valtellinese”, a native of Buglio in Monte. Stefano (Scasci) in 1981 and Cinzia in 1984 were born from their marriage.

The early 1980s are the years in which Silvana and Luisa, with the support and help of their respective husbands, decide to take the reins of the business. Like any generational change, the energy of the daughters is countered by the fear of the parents, who although aware of the values handed down to the daughters, saw with concern the changes taking place and, jealous of their past, fear the frustration of the sacrifices made. In particular for Oreste and Giovanni, the initial mistrust was at times even harsh but, with time, made the family even stronger and more united.

The overcoming of the misunderstandings, the desire to commit themselves and the energy of the new generation accelerates the continuous renewal of the Hotel Adele which in a few years sees the installation of the lift, the renewal of the bar, the reading room and, above all, the progressive reduction of the number of rooms (to provide them all with private bathrooms). The 45 rooms of 1964 were reduced to 29, also for the problems in altering the building and being in practice impossible to modify the main structure. 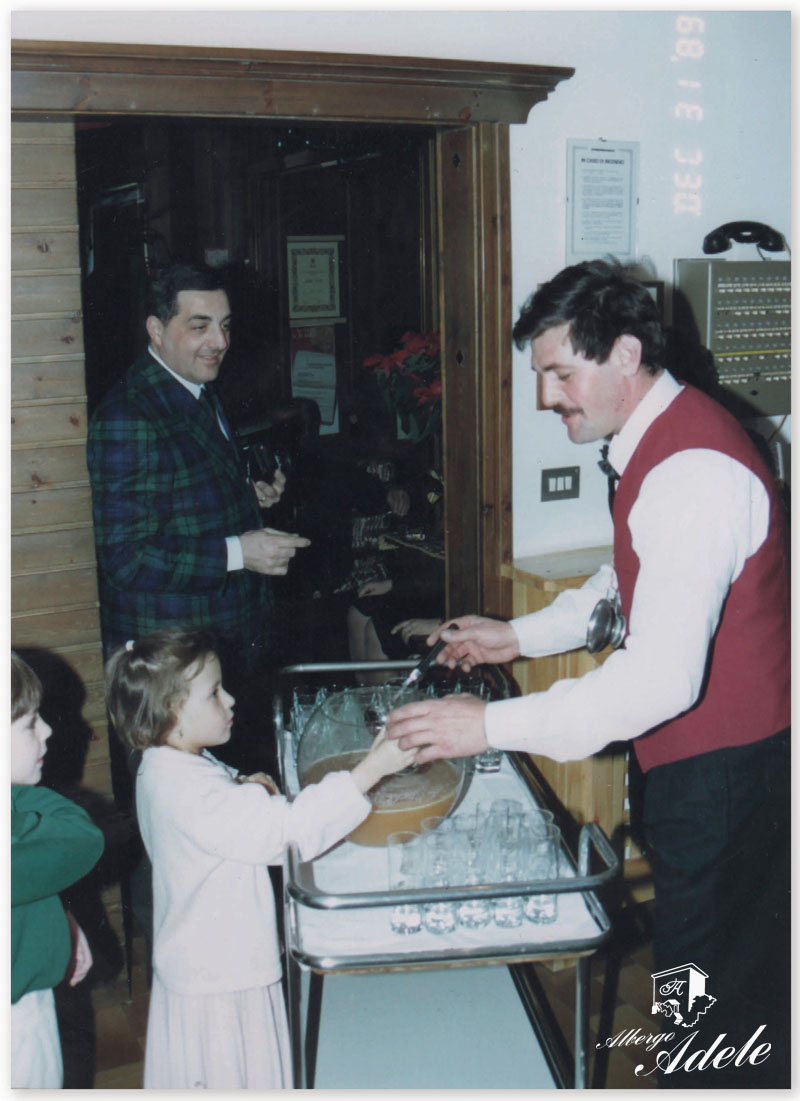 In those years, in the hotel, two small apartments were prepared for Silvana and Luisa to offer a little privacy and rest from the life among the guests. This enabled Francesca, Stefano and Cinzia to grow up with the parents and the guests that, with time, became uncles and adoptive grandparents.

Tourism continued to evolve, Bormio became a renowned resort in the Alps and skiing, which had its boom in the 1970s, was the king. The 1980s are the years of the great foreign travel agencies and of the first World Ski Championships which, in 1985, brought Bormio and its Stelvio slopes into the skiing Olympus, also thanks to the successes of the great Swiss champion Pirmin Zurbriggen.

The boost of the World Championships promoted the renewal of the Bormio-Ciuk cable-car and the birth of its main multi-purpose facilities: Palaghiaccio and Pentagono. Modern and futuristic structures, designed by the unforgettable Aldo Mevi, family friend and cousin. The building expansion of the town and its holiday homes continues. Tourism remains the main economic resource of the territory even if the initial boost and energy of the 1950s and 1960s, which brought substantial widespread well-being to the country, is now fading. 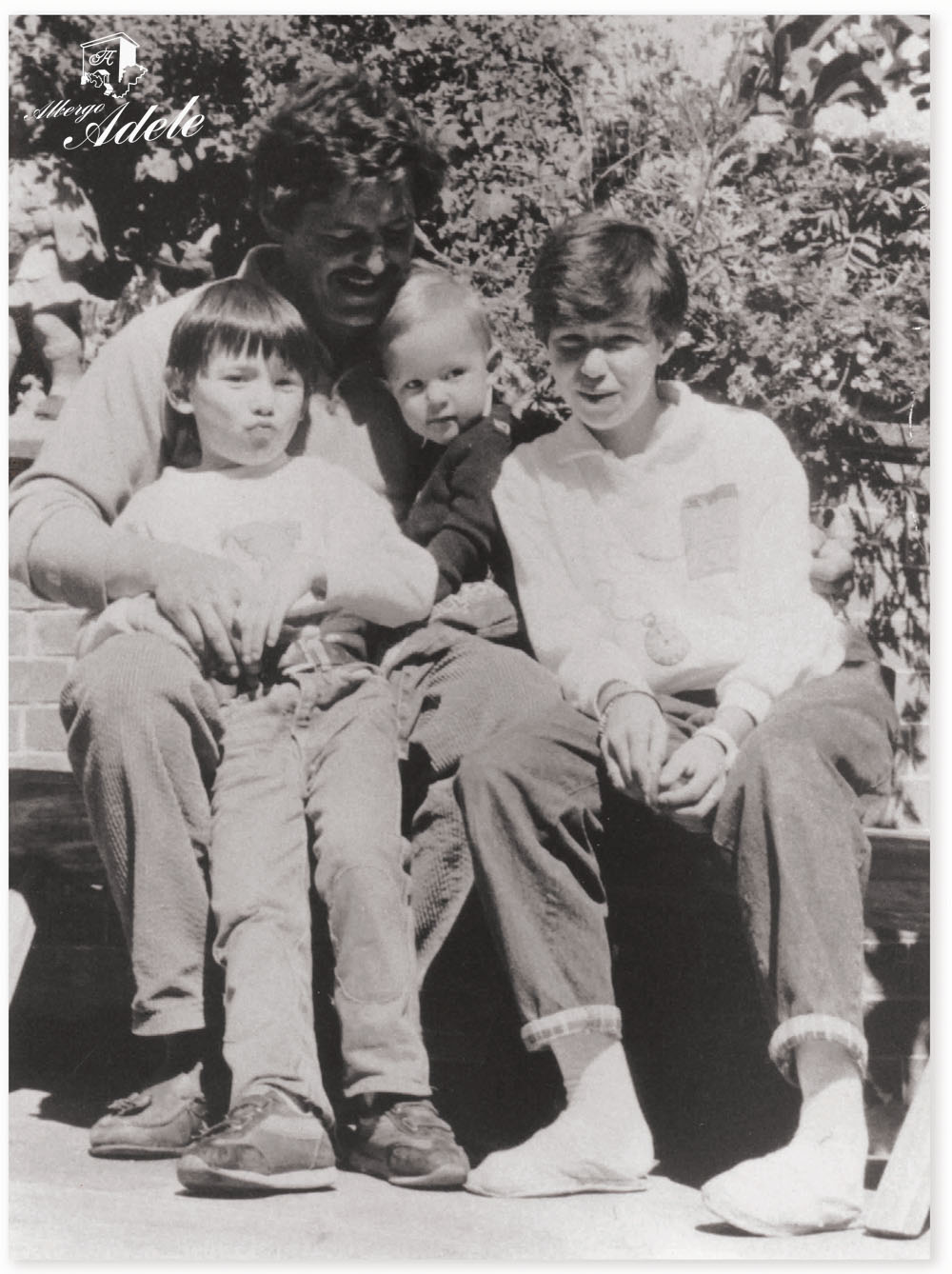 “Indeed, tourism is now as important for this area as it was the commercial enterprise of the dawn of its history. The “Bormino”, hard worker, ambitious, wary and saver, endowed with firmness of mind, common sense and business sense (all self-descriptions), has solved the equation of survival or, better, of comfort, in this direction. There are cases of social exclusion, but well-being is generally well distributed. In the city it is possible to study up to high school level (scientific or artistic). Schools born by private initiative alongside the premises of the celebrated Jesuit school. Then the young people can also go to the University, elsewhere. Not many come back, even for graduates there are not many prospects. But this is national history. The craftsmanship (wrought iron and wood) is very limited, (reread the 50s. ed) agriculture, in crisis, should be helped. The “maggenghi” have been abandoned for some decades, the land is no longer a resource, youngest generations say it must be treated “with an industrial mentality” and show some interest. But this is also national history. Public employment and employment in small companies are the last alternatives to tourism which obviously involves a whole series of induced activities, around which moves the economy of the whole area.

Bormio has facilities and climate for stays all over the year. We have also said this, while bringing the imaginary hiker around the region and the Stelvio National Park following extensive summer and winter itineraries, providing detailed information on the various activities alternative to skiing that can be done here, also letting the stones of Bormio and its valleys talk about history, art and culture. But at the end of this long presentation sheet some considerations are legitimate.

Which tourism? A norm of the ancient Statutes, curiously in some ways, required that the oxen must be put in front the cart. And so far a well-known proverb also recommends it. But also said in addiction, that in front of the oxen (right in front and not at the side or, worse, behind) there always had to be, under severe penalties, the driver. Out of metaphor, those responsible for the public affairs of the 1980s had the same opinion: “It is necessary – they affirm – to manage tourism as if it were a company: with shrewdness, intelligence, spirit of initiative, imagination, creativity, foresight. The beauties of nature on which tourism is founded must be defended at all costs” .

The concept of nature to be preserved does not refer only to the territory. There are artistic assets that must be treated with respect in an area where it is not uncommon to meet finds from the first millennium. The complete visit takes days. They are churches, noble houses, public buildings and architectural works, museums: from Cepina to Pedenosso, Uzza and Teregua. Including Bormio, of course. Restorations have not always been done properly. But it is important that we want to proceed as shown by the recent studies for the preservation of the historic center. […]

The dialect survives, breaks the speech “in good language” here and there, but the elderly people on the Combo bridge make a face. They warn, in their ancient wisdom, that along with the local dialect also some of their memories fade away. 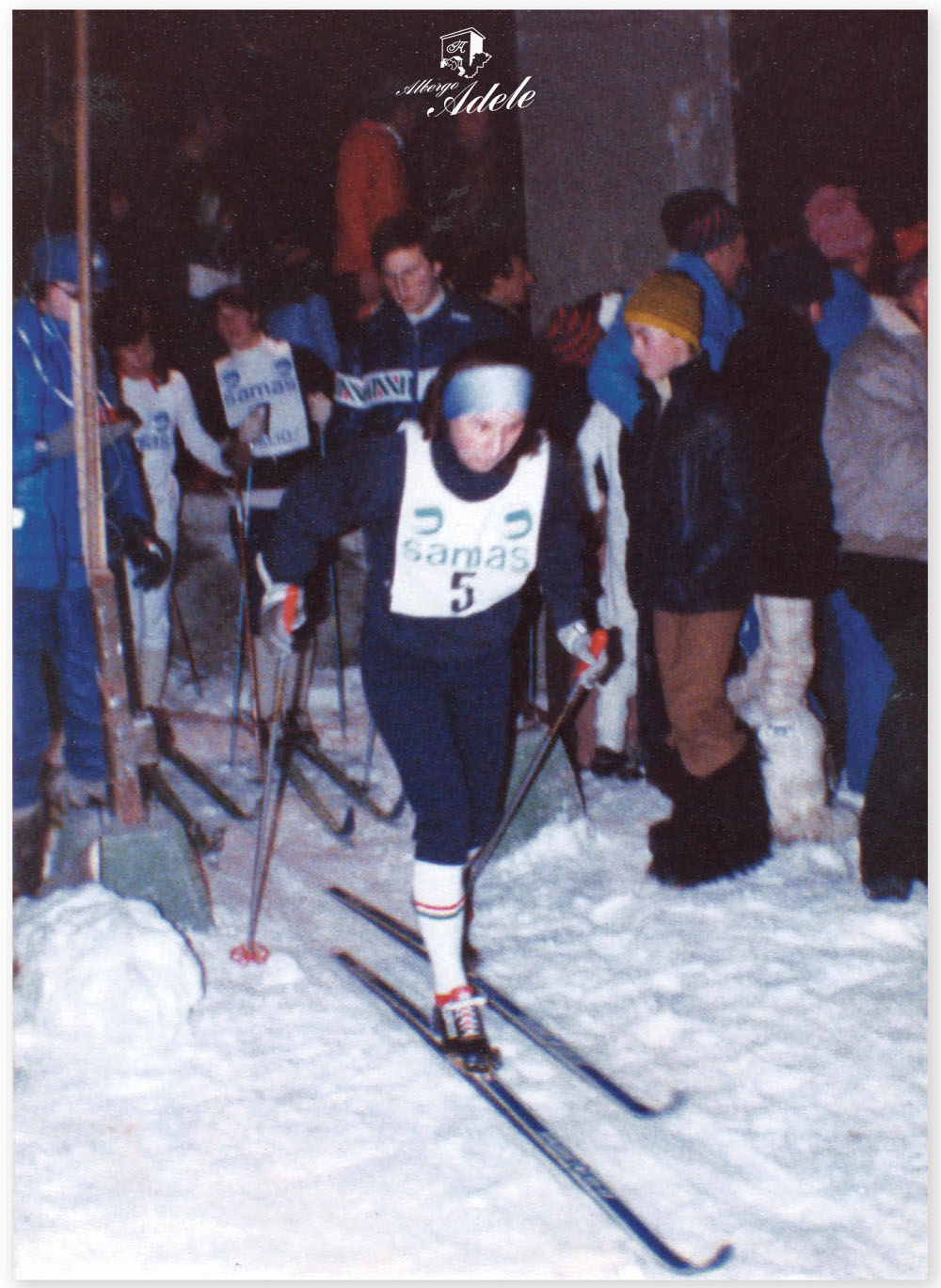 The concept of nature to be preserved thus also includes the human element with its culture, uses and customs. Surely this are terms to be reconciled with the need to find daily resources for a dignified existence; for sure there would be very serious risks in front of a blindly massified tourism, a temporary vehicle of very different and sometimes overwhelming values: for a half colonizing, for the other half pretentious dreamer of impossible primordial paradises. The program then becomes mandatory for the administrators, who in fact add: “We must avoid falling into the temptation of” all at once “, which would lead to uncontrollable consequences to the territory, would make the mountain an” annex” of the cities, would create only problems for future generations and difficulties.

And once again the working method is the ancient one, this indeed primordial, uncontaminated, mandatory: the consciousness. About yourself and others. We presented ourselves with the firm illusion of having served a more mature and responsible tourism. ” (Bormio – L’Alta Valtellina di oggi e di ieri – Un turismo diverso nel Parco dello Stelvio – G. Peggion, G. Ramazzotti – 1986).