Skip to content
You are here:Home|Posts|Hotel Adele: a hotel, a family|The Church of San Gallo

The church of San Gallo

The church of San Gallo, with its sloping roof and pointed bell tower, has dominated the Molina meadow for hundreds of years. Unfortunately, the date of its first foundation remains unknown.  Historians believe that the church may have been founded in the early Middle Ages due to its dedication to St. Gallen, a disciple of San Colombano, who is always depicted alongside a bear in classical iconography. The first certain mention of this place of worship, built near the ancient “Via di Fraele” (a strategic trade route between northern and southern Europe), is instead dated 1243. The church and the surrounding areas, including the “Prà de la Giustizia” (field of justice), will also play a dark and important role in the period of the Inquisition.

Inside the church, illuminated by a splendid natural light, it is possible to admire fifteenth-century frescoes and a beautiful statue of St. Gallen with his faithful bear. It is also possible to observe, in a glass case, the ancient foundations of the church next to a perfectly preserved skeleton dating back to the fifteenth century.

Saint Gallen and the bear

Born in Ireland in the mid-sixth century and a disciple of St. Columban, St. Gallen is a little known saint in Italy but well known in the regions of Switzerland, Bavaria and France.

The classic iconography depicts him next to a bear as the legend tells that St. Gallen, retired as a hermit, healed a bear with a wounded paw that approached him to feed on the leftovers of his meal. The bear, cured by St. Gallen, never abandoned the Saint and by remaining with him was a protection and deterrent against those who hated the monk because of his preaching against idols.

His feast day is on October 16. 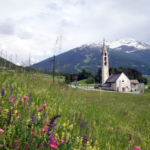 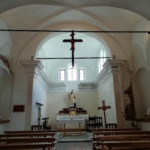 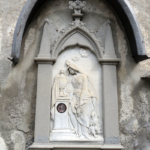 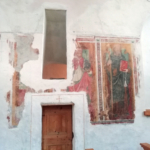 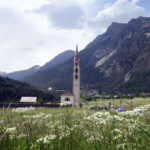 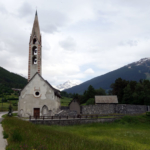 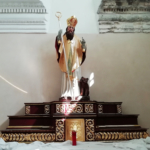 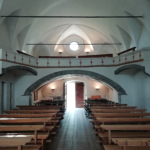 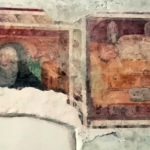 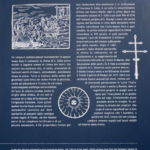 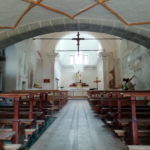